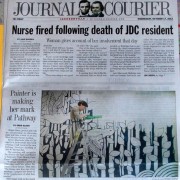 The big mural that I am painting in the entrance of Pathway Services Organization has been documented by Journal Courier newspaper of Jacksonville, IL. This is what happens when you travel to paint a mural in a small town – you make front page news! (it was a bit awkward to pose for the photographer, so… I just kept working!) 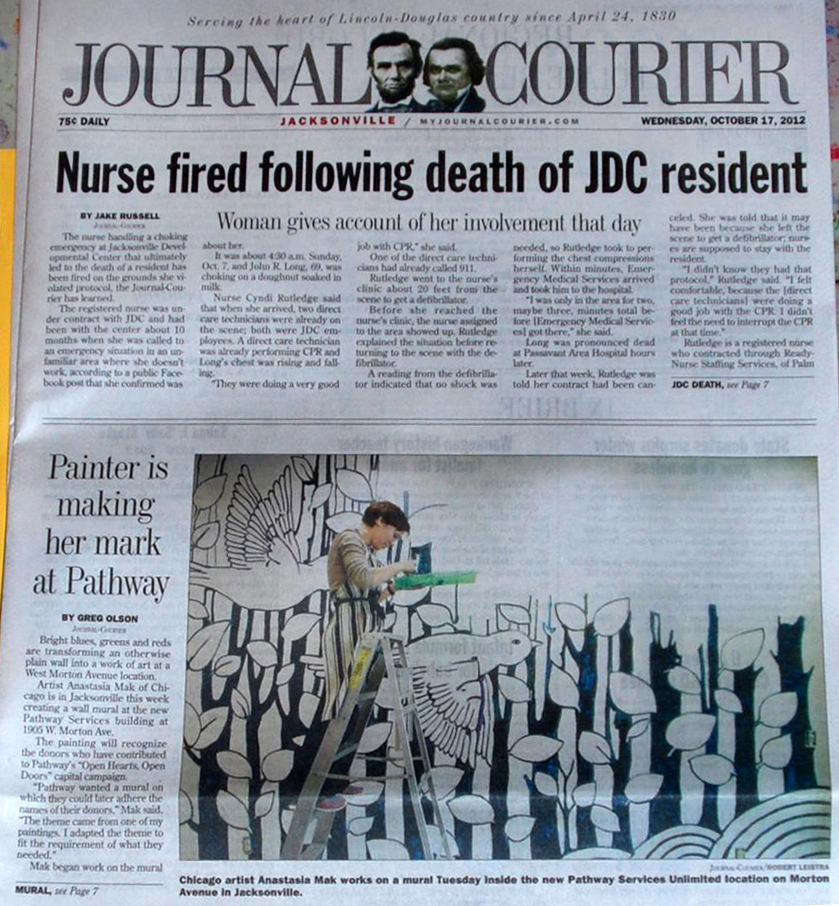 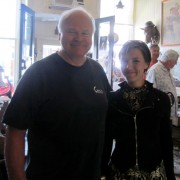 Earlier this month I had the pleasure of driving around the lake to southern Michigan, where I met up with a radio host John Smietanka and recorded an hour-long With Respect radio interview in his station in Three Oaks.

John and I met after he stopped in my booth at Krasl Art Festival in St Joseph, MI earlier this summer. John’s also an attorney, and he annually travels to Czech Republic, where he educates Czech and Slovak lawyers about American legal system. We had a great little chat about Eastern Europe, and he then invited me to be a guest on his program, titled “With Respect”.

I have never done a radio interview before, and have to admit I was a little nervous at fist. After all, I can’t show my art on the radio, AND have that weird Ukrainian accent! But, as we started talking, the nervousness dissapeared rather quickly and was replaced with my eagerness to tell stories. It was partly due to John’s interview style – he is a wonderful host, and immediately puts you at ease. In the end, I had so much fun doing this, that an hour flew by before I knew it. We have even been discussing recording a “Part 2.”

Here is the link to the invterview:

“With Respect” hosted by John Smietanka with guest Anastasia Mak

And this is John giving me a mini-tour of Three Oaks: Interview will also air on Sunday, September 2, at 11 am EDT and Thursday, September 6, at 10 am EDT on www.radioharborcountry.org 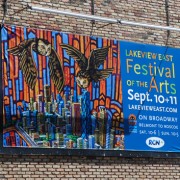 Now that the Lakeview East Art Festival is over, I wanted to share all the photos of this year’s promo, in which they used my artwork to advertise the 2011 fest. I have been posting many updates about this on Facebook, but for those of you who don’t (yet) follow my FB art page (you probably should: https://www.facebook.com/anastasiamakart), here is a little pictorial summary of where the Owls have appeared in Chicago.

I was very honored that the Lakeview East Chamber of Commerce selected my “Owls Over Windy City” painting for this year’s promotion. The selection of this image, I think, was very fitting with the reason of why this piece was originally created. (read about it here). Anyhow, its been so much fun to spot the Owls around Chicago in various print forms (starting with the Gay Pride Parade in June, which also takes place in Lakeview East). Here’s a photo gallery of many places where the Owls have “landed” this summer. And thank you everyone who came out to the festival, and thanks to my customers for all your support! Owls lurking behind DJ of the Pride Parade float: Owls landed on the bus stop: Owls behind stage at the festival: 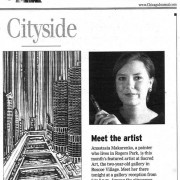 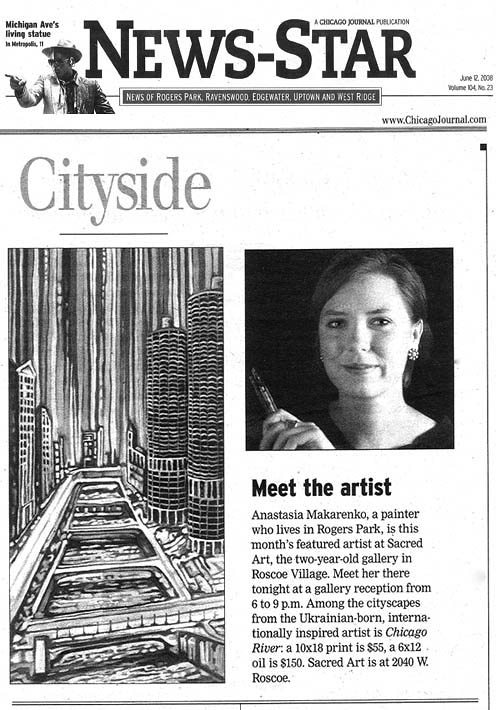 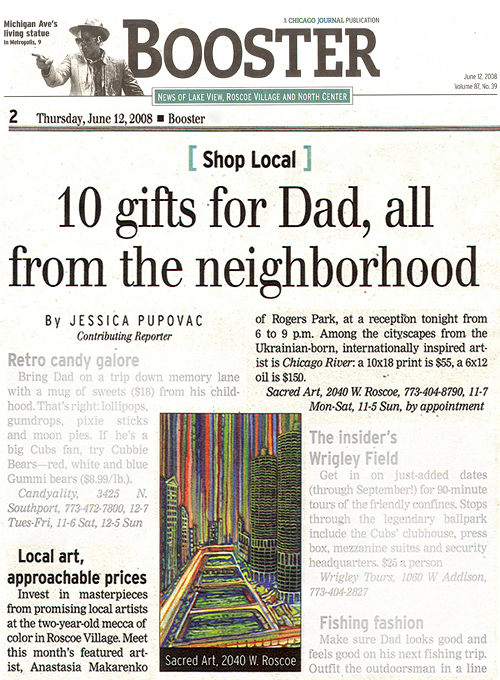 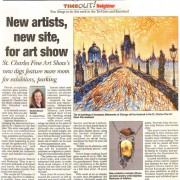 My painting of Prague’s Charles Bridge has been featured in Daily Herald in anticipation of St Charles Fine Art Show. 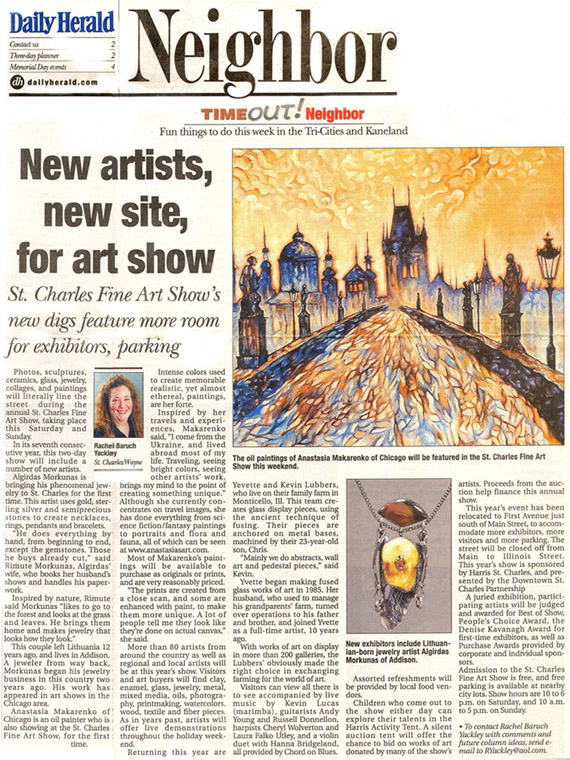 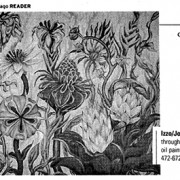 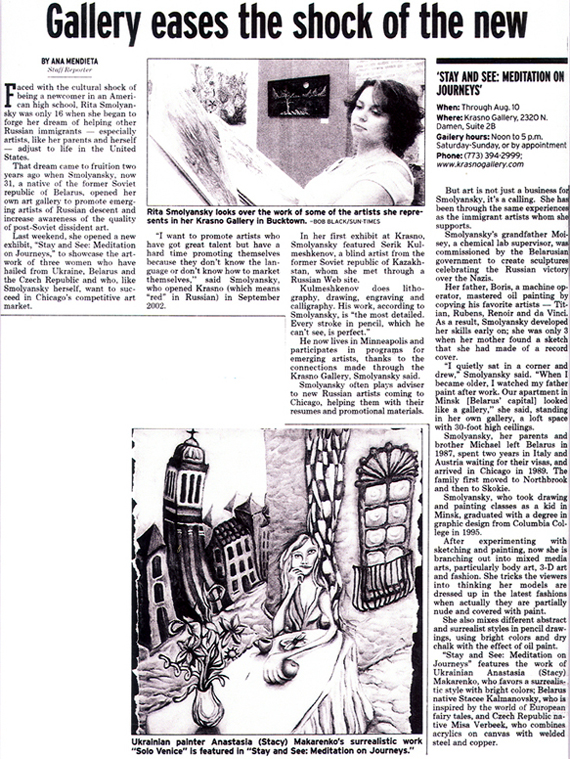 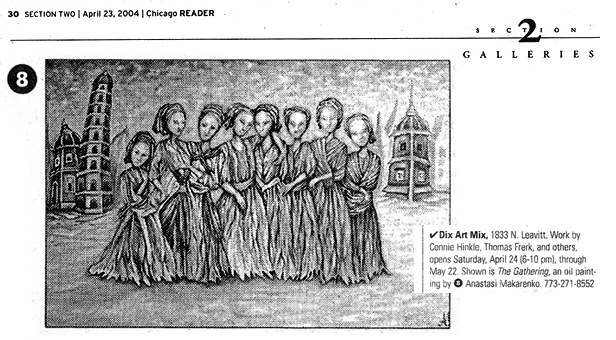