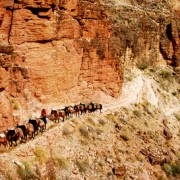 It is difficult to describe the breathtaking feel of seeing Grand Canyon in person for the first time. No photos or high-def movies will EVER do justice. You just have to stand there and take it all in, comprehending that the distance to the other rim is 10 miles. 10 miles of million year old erosion. 10 mile thick, 277 mile long, Big Crack in the Earth. We stayed on the South Rim at the Bright Angel Lodge. Our cute and cozy cabin was located a minute walk from the rim and the Bright Angel Trailhead. Many people say thatSouth Rim is too crowded and touristy, while the North Rim is more beautiful and less developed – and they are probably right. But we had ambitious, grand plans here at theGrand Canyon, including a possible DAY HIKE all the way to the Colorado River and back. It pays to know that the North Rim (8,000 feet elev.) is much higher and further away from the river than the South Rim (6,800 feet elev.). The length of the Bright Angel Trail to the river is 8 miles each way (possibly doable in one day), and the length of the North Kaibab Trail is 14.5 miles (not really doable in one day, unless you hike in the darkness). The Grand Canyon Village, even though touristy, is a nice establishment. The Villageconsists of several hotels, lodges, gift shops and restaurants, a campground, a grocery store, a gas station, and offers free Village Shuttle and access to multiple hiking trails. All the staff also lives on the Village property, and their houses are hidden from tourist view. There are dozens of canyon observation spots on its territory. What we liked about theVillage is that it is not overdeveloped, nor outrageously priced. There are no spas or casinos here. Its focus is solely the Canyon. Upon paying your park entrance fee ($20 per car, good for 5 days) you get a copy of The Guide – a village newspaper full of maps and information.

We had 3 days and 4 nights in The Canyon, so we planned our itinerary accordingly. On the first day, we hiked the South Kaibab Trail (on the Eastern side of the village), on the 2nd day we did Hermit Trail (on the West Rim side) and saved the Bright Angel Trail for last. Over our stay here, we had multiple encounters with deer and elk (like this guy). In theGCNP, the wildlife is aggressively protected so they roam freely and don’t seem to have any fear of people. My belief is, you don’t really see the Canyon until you get IN it. It is amazing how many people here get off the tour bus, stare at the Canyon from the rim for 2 hours and then leave, never to return again. The Canyon is completely different from the inside! There are so many more views and perspectives that open up once you get on the trail. Even if you hike for only an hour, it is an unforgettable experience. For those unable (or unwilling) to walk the trail, mule rides are available. Although – a word of warning – mules are not any faster than hikers, and some of them can be a little temperamental.

The South Kaibab Trail is well maintained. It steeper than Bright Angel Trail, but the views from it are more dramatic. Here is the staring point photo of South Kaibab. Hiking in the Canyon is great because your payoff in views happens 100% of the time. Unlike with mountains, you don’t have to wait until you reach the summit. On the other hand, it is easy to go downhill but much harder to come back up – so you have to know your limits. The saying here is: “What goes down, must come up.”  We hiked South Kaibab for about 4-5 hours, going a couple of miles past Skeleton Point before turning around. We carefully timed ourselves. They say, it takes twice as long to come up as it does to come down, but with us, it was not the case. Our trip was roughly as long to the bottom as it was to the top. Good to know.

The mules are cute and add to the authenticity of the hike, but they also tend to leave“fresh presents” on the trail that you do not want to smell (even though they are grass fed). I learned quickly to close my nose in their presence, especially on the exhausting trip up, to avoid feeling nauseated in addition to being tired. How amazing though – these animals go to the bottom and back daily, carrying people, luggage and supplies. They are pretty much the lifeline of the canyon. From Skeleton Point on the South Kaibab Trail, the Colorado River is visible as well asPhantom Ranch and the Bright Angel Campground (the green area in the photo). Earlier, we tried making reservations at the Phantom Ranch, but that place gets booked months in advance. No wonder. People come from all over the world to stay at the bottom of the Canyon – an area accessible only by foot, mules, and river. As for camping, November night temperatures are pretty chilly – and so confirmed every camper we asked.

The South Kaibab Trail was a bit tiring, but it was good to start getting into the pace of longer uphill climbs. The following day, we hiked Hermit Trail and to get to it we drove west for about 20 miles to the end of Hermit Road (still on the GCNP territory). Hermit Roadfollows a curve along the canyon rim and from it there are many panoramic views of theGrand Canyon Village. Because of the curve, this area is known as the West Rim (not to be confused with Grand Canyon West, described earlier). Here is Bright Angel Lodge, where we stayed. Way in the distance are San Francisco Peaks. Hermit Trail is not maintained (meaning, it is more like a typical hiking trail, and no mules walk it) and is rougher and steeper than other trails in the park. Like many trails here, it began as an Indian route. It offers a different perspective than South Kaibab and Bright Angel Trails, because it is tucked away in that West Rim “curve”. We hiked a couple of miles past Santa Maria Springs point (the little house in the picture below), making it another 4-5 hour round trip – and again watched our timing. The views were, again, gorgeous, and it was hard to turn around and start that climb out of the canyon. Towards the end, the switchbakcs got steep and exhausting. Good thing we brought plenty of water. Now that we really know our “canyon pace”, we will attempt to reach the Colorado Rivertomorrow. Kurt wasn’t so certain that we’d make it to the river, given our limited November daylight, but I was optimistic (he just doesn’t have faith in my ability to wake up early). From Hermit Road, here is a perfect view of the Bright Angel Trail, tomorrow’s path. What you’re looking at is 1st half of the trail, and takes several hours to walk.  Continue reading to find out if we survived the BIG HIKE…hehe.