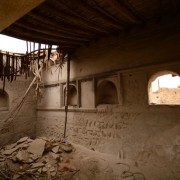 For my live painting session at the RAK Fine Art Festival, I had to come up with a subject that connects to Ras Al Khaimah – so, the obvious choice was to depict a local landmark. There is a lot of new construction in RAK, as this is a rapidly evolving region of a very young country – but what’s more interesting to me is historic decay. After reading about Jazirat Al Hamra Historic Village (sometimes spelled Al Jazirah Al Hamra), I became fascinated by it and decided that it had to be the subject of my painting. 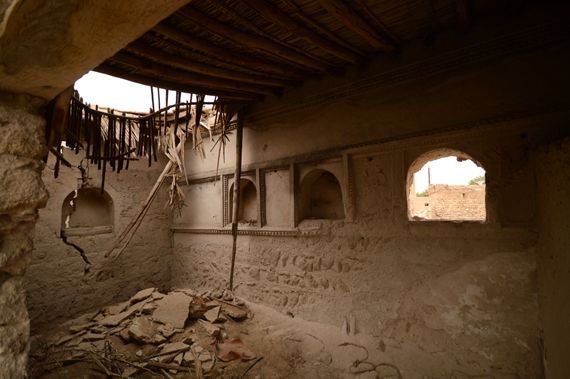 After we settled in our hotel in RAK, Kurt and I took a cab out to the village to explore it. We were told that it would probably be difficult to catch a taxi back to our hotel, as there are not many that go by the village – so we made arrangement with our cabbie to be picked up in the same spot in an hour. 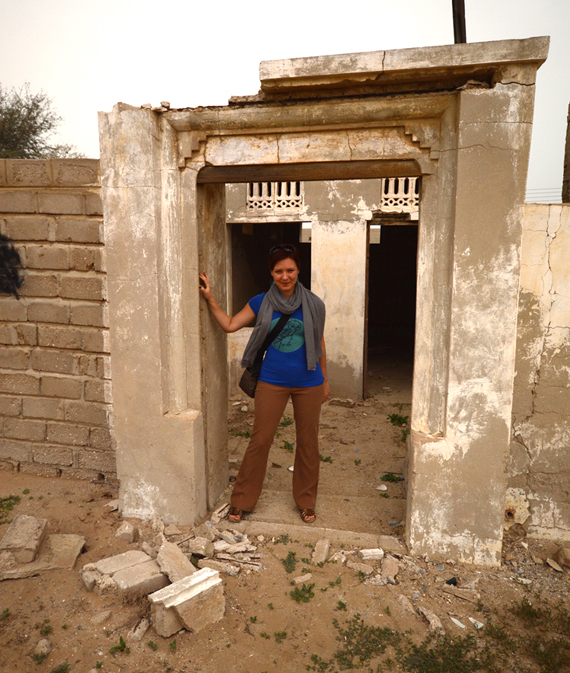 The historic town is located near an older residential neighborhood, where many people were out as this was Friday – non-working prayer day for Muslims. (by “people”, though, I mean men – women tend to stay at homes with families as opposed to walking to mosques with their husbands). After we entered the village, however, we became enveloped in total silence – this is a ghost village, after all, and channel a strong eery sensation it did. Not surprisingly, many locals claim it to be haunted. Overcast weather also helped set the backdrop. 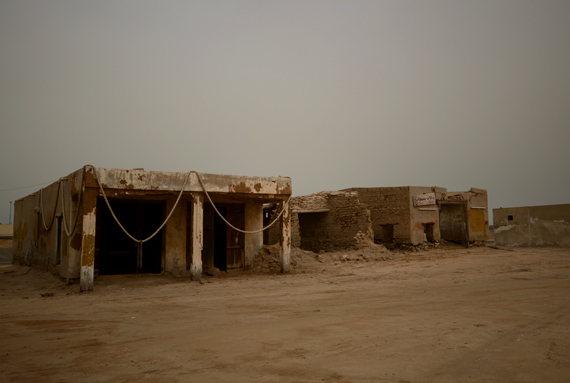 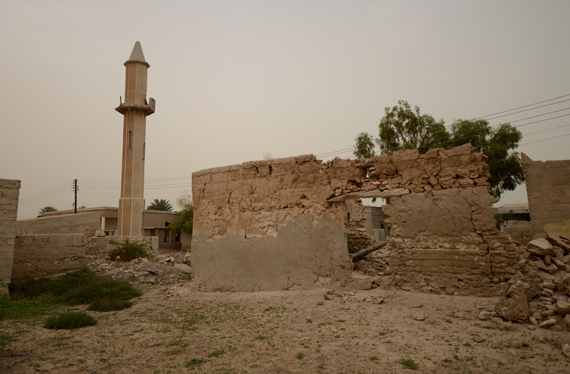 Jazirat Al Hamra  – which translates to Red Island – once was a busy coastal settlement. It thrived on fishing and pearl-trading, and was occupied by the al-Zaab tribe. Its remains are full of pre-oil era architecture, with many buildings constructed around early and mid-20th century. The settlement itself dates way back to the 14th century. At one time, it actually was an island – but the space around it was slowly filled in, connecting it the mainland. 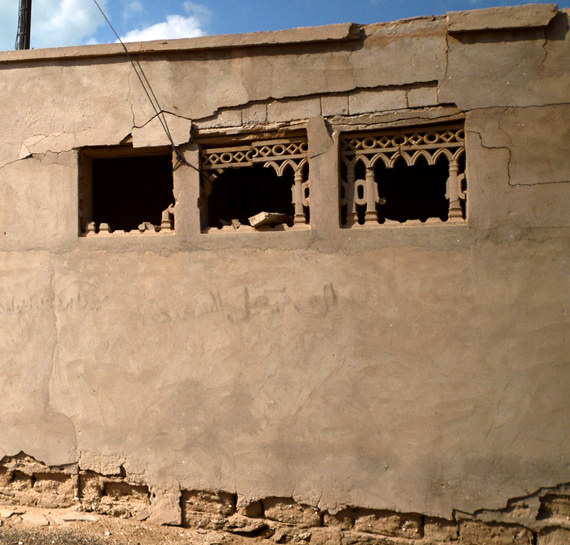 Many of the walls here were are constructed from beach rock, corals, and sea shells, mixed in with mud. Decorative elements of houses appear to be made out of porous concrete (or a material similar to it). The village has now been abandoned for about 5 decades, and many parts of it are very brittle. Hiking through these ruins, I had a feeling that some of the remaining standing walls could crumble had I decided to push them hard enough. I could have taken pieces of these buildings home in my suitcase if I wanted to. The village is wide open for anyone to enter, and yet there was NO ONE – not a single soul – there aside from the two of us. 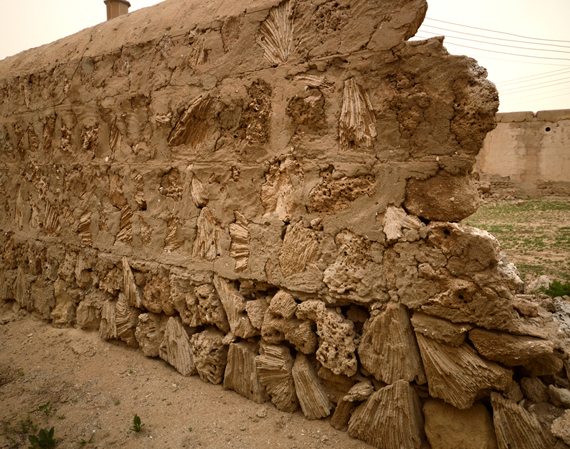 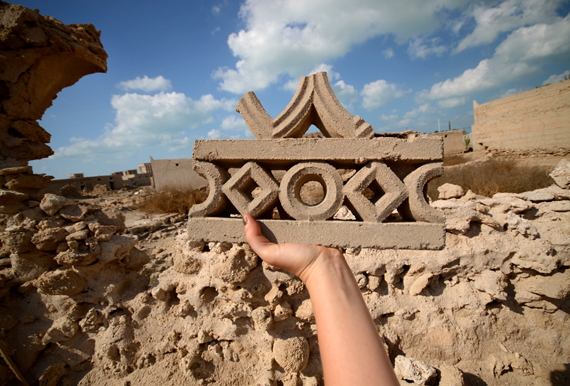 The wealthiest residential home in the village (which belonged to a merchant) is constructed with wind towers – they were are designed to funnel any breeze into the house and served a fan in this hot climate. (Modern architecture in the Emirates mimics these types of wind towers – although now, that air conditioning is prevalent, they are only built as an imitation for decorative purposes). 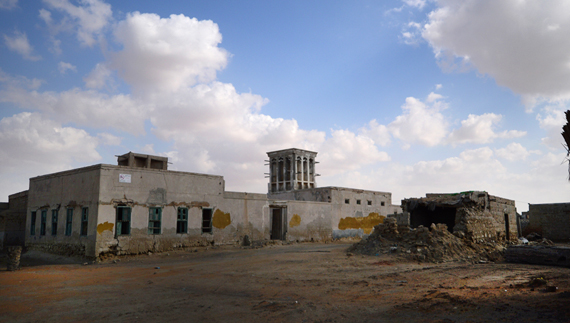 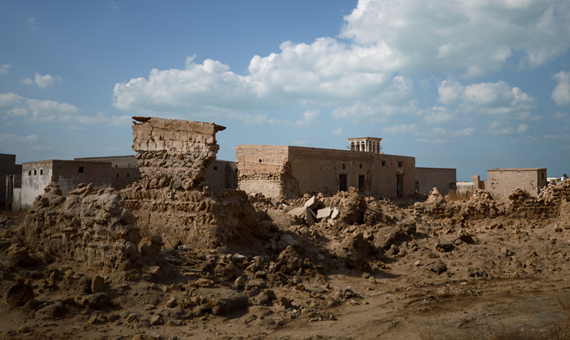 The center of the village contains one of the oldest mosques in the Emirates, along with once bustling market stalls where pearl trading and sales of goods, shipped in from faraway lands, used to take place. 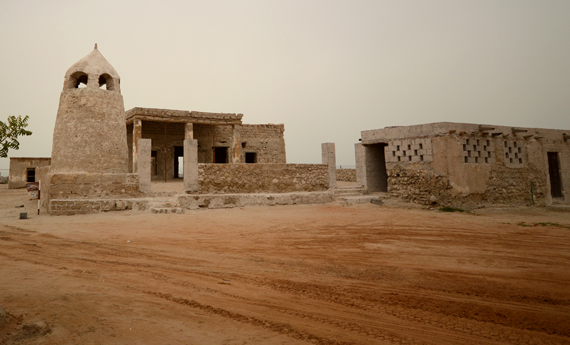 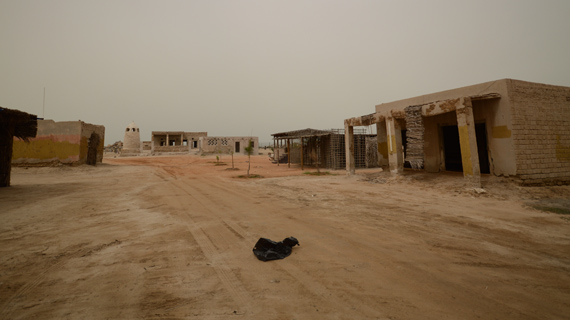 At the cusp of the 20th century, Jazirat Al-Hamra had a fleet of 25 ships and many more pearling and fishing boats. Pearl divers from the village performed grueling journeys out to sea to fetch the treasure from pearling beds. Village’s positioning on the Arabic Gulf shore helped make it an important hub, into which goods from Africa, India, Iran were brought by sea and then distributed by resellers to other locations. 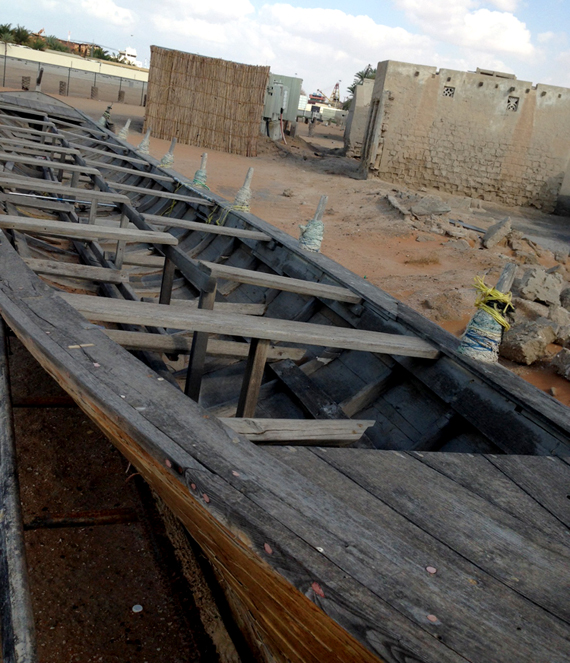 It was amazing to think of all this history while climbing over ruins of rock, stepping inside old buildings and not encountering a single soul. Once we reached the central market area, we had to turn around and head to our meeting place with the cab driver because an hour went by so quickly. But we knew that we did not see the entire town, and we were craving to explore the rest. Well, 2 days later we were in another taxi headed back here. 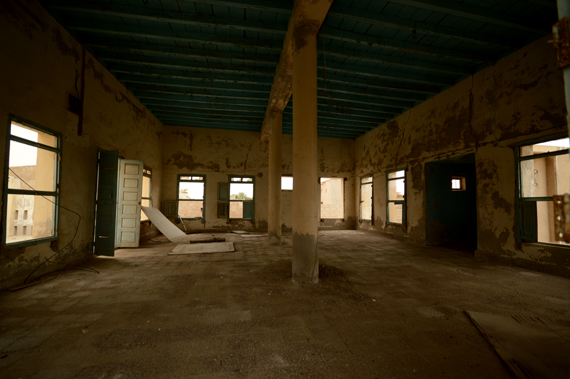 Our second cab driver had never heard of Jazirat Al-Hamra and has no idea where to go. He even consulted with other cabbies, and we pointed to it on the map, but he still did not have a clue. Luckily, we now knew the way and guided him as he drove. We didn’t ask him to return to pick us up – getting a taxi back from the village may be difficult, but certainly not impossible (we were happy to take our chances). This time, I also wore tennis shoes – because climbing rocks and ruined in fancy sandals previously proved to be a little painful. 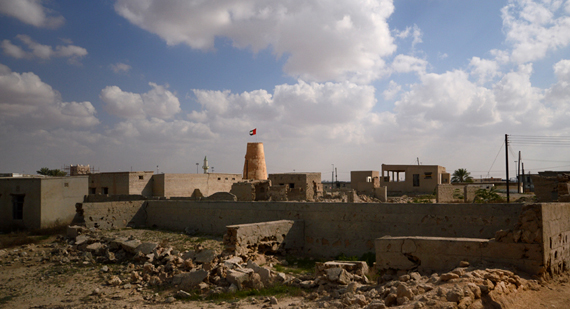 Our return was on a sunny day, and because of clear weather and white puffy clouds, village felt less haunted, but was still very quiet and 100% empty again. 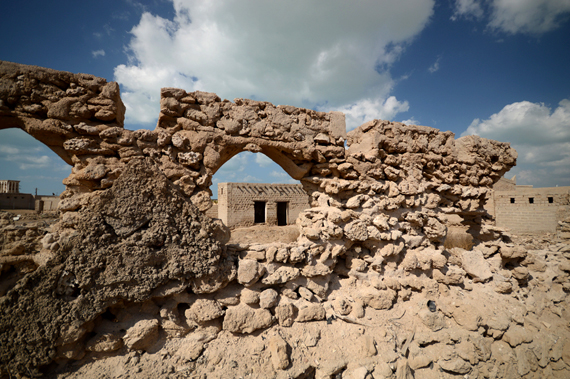 Around 1930’s local pearl trading industry started to dry up, as Japan was underpricing pearl sellers from this region. Over the next 3 decades, the village was surviving on sales of other goods and boat building, but local inhabitants began to have problems with their government. Eventually they started to relocate to other bigger cities, attracted by better job prospects in the evolving oil industry, and others were given newer residencies elsewhere in Ras Al Khaimah. Yet some locals strongly believe that people moved out because of Jinn – spirits from another world that haunted this town. One way or another, Jazirat Al Hamra was abandoned in the 1960s. 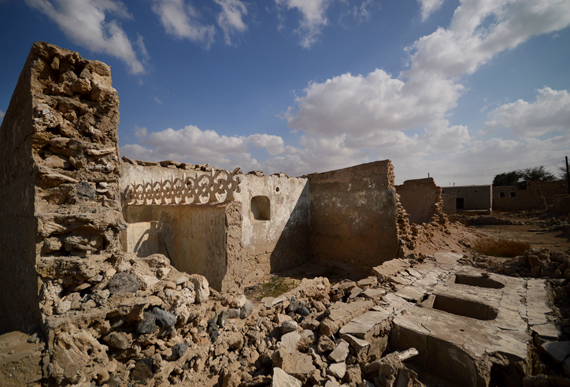 There is no other place like it in the UAE, and while efforts are underway to protect and clean up Jazirat Al Hamra, we were amazed to see how accessible and open and full of rubble it is. This ghost town is quite large – on our second day we walked for another hour and a half and saw the rest of it. And while our hotel (a 15-minute cab ride away) was packed with European vacationers, NONE of them were making their way here – it just doesn’t seem to be a tourist destination, which is mind-blowing considering how fascinated I was by this place. I certainly don’t think it will stay like this – as Ras Al Khaimah continues to develop and attracts more international visitors, the village will eventually get ‘discovered’ and tourist crowds will follow. I also believe (I hope!) that this place will become better preserved, which probably means that most fragile buildings will be off-limits. …For now though, if you are in the Emirates, want to step back in time, away from any noise, and be completely alone – there is a very good chance you will find that in Jazirat Al Hamra. Just wear comfy shoes. 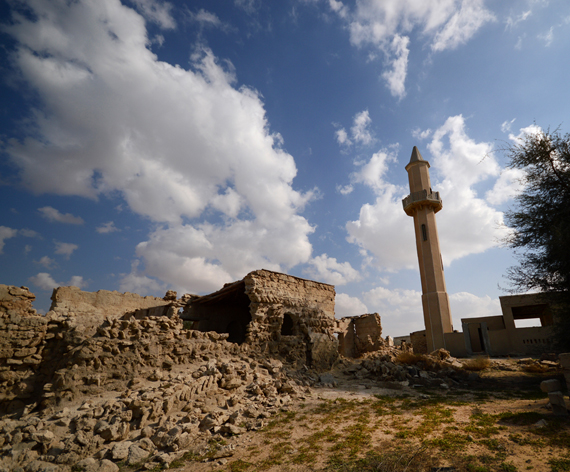 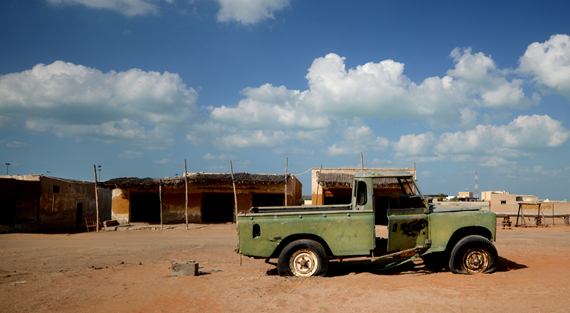 As for my live painting subject, I selected the village’s oldest mosque and its entrance fort. I juxtaposed both structures on a square canvas. Go here to see painting’s progress shots along with a completed piece.

Oh, and here I am with Anna. She is a reporter who lives in Ras Al Khamiah. She has immense knowledge of the area and its people. If you are interested to read an in-depth piece on Jazirat Al Hamra (along with a link to the interactive map of the village’s center) – check our her article right here.  She also runs an amazing Facebook page, People of Ras Al Khaimah . 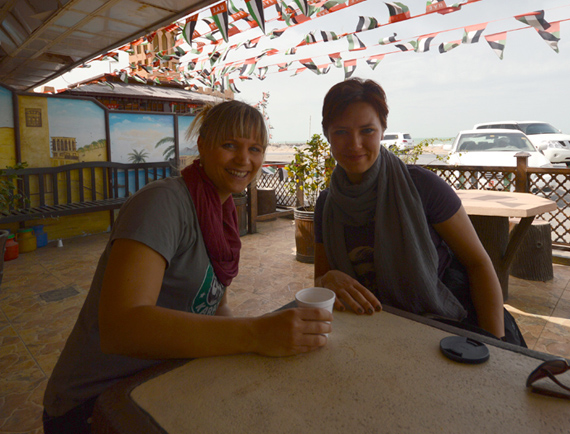